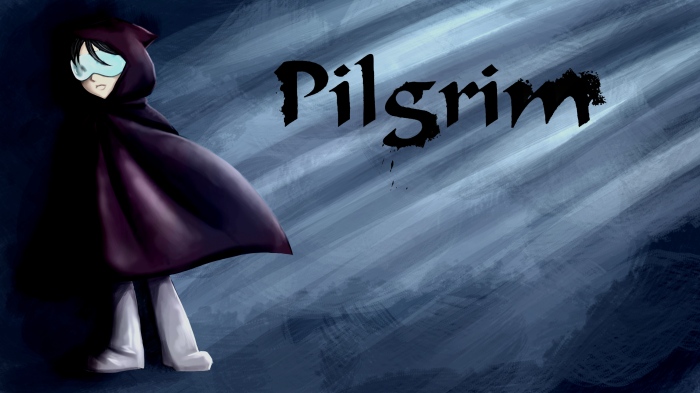 This postmortem was one of the hardest things that I’ve ever written. I’m good at clinical, analytical writing, but stuff like this is tough to put out and might not be well edited or clearly communicated. Nonetheless, this postmortem deals with my latest game, The Pilgrim, a short-form game codeveloped with Catherine Fox for Richard Lemarchand and Peter Brinson’s Intermediate Games class, a cross-country collaboration between USC Games and the Berklee College of Music.

The Pilgrim was originally intended to be a personal game about religion and my feelings towards it. Through mechanics and story, I wanted to deal with the courage required to have faith in uncertainty, the changes we must make to the direction of our lives to uphold ideals, and the sacrifices that we must take to back those convictions.

In making this game, I wanted to come to terms with my own confusion, frustration, and hesitance over my agnosticism, as well as emphatically communicate through play those exact feelings. I believed that the medium and design that I chose was apropos for such subject matter because videogames, as Anna Anthropy states in Rise of the Videogame Zinesters, are uniquely capable of confusing and frustrating players.

Primary inspirations for our metaphorical mechanics were Thomas Was Alone and Dys4ia, as well as Metroid: Zero Mission and Zelda, the latter communicate the monomythic hero’s journey narrative in their gameplay, and the former metaphorically utilize game feel to depict social systems.

Why I Wanted to Make it

In my nebulous understanding of it, religious faith requires adherents to make a lifelong sacrifice: the alteration of one’s life purpose to fulfill the ideals and tenets of a particular religion. It requires one to cease pursuing one overarching goal and start pursuing another.

My beliefs in my purpose on Earth are strong. My understanding of it has become my credo, it is the thought that I wake up every single day with, the dream that I work towards with every waking hour. “I want to be the greatest game designer”. My hesitance towards religious belief isn’t grounded in doubt of the existence of God or any higher power; my hesitance is grounded in the fear that I would have to alter that conviction. The idea of letting go of that purpose and living out any other one terrifies me.

Granted, that deluded dream has been problematic on a number of levels. The desire to be the very best has made me paranoid of failure and humiliation. I eagerly take on leadership positions and obsess over whether or not my team trusts and respects me. I’ve held passive-aggressive rivalries with some of my best friends at IMGD. These delusions have been responsible for a number of problems that The Pilgrim faced during its production, and as a student, I’d be better off without them.

And yet, a meme that you’ve ingrained into yourself every day for years is a hard one to unhand. To accept any other purpose as your own, religious in nature or not, is a tough sacrifice to make. Living for God and creed rather than aggressively giving games to the world, that’s a huge change in my life’s direction.

The sacrifices we make to fulfill our perceived purpose is the main theme of The Pilgrim. Hopping around the first level, feeling empowered may be fun to do, but that’s not what players must do to fulfill the overarching goal of the game, at least under the lusory attitude. In order to fulfill the Pilgrim’s purpose of descending to the bottom of the Temple and ousting the Shadow Beast below, players must choose to accept the sacrifices, their associated penalties, and the intentional frustration that comes from clunky and restrictive locomotion. Taking comfort in fulfilling their purpose in the gameworld, and leaving with different interpretations based on their life experiences.

The Pilgrim was valiant, but didn’t nail this goal precisely.

We ran into a number of production issues during development, the first came from the fact that both Catherine and I were juggling work on The Pilgrim with numerous other projects, including theses,pitches, and other demanding classes. Both of us were only able to dedicate a fraction of our time to the project and were not able to test or prototype as early or often as we would have liked. Up to the final hours of the project, we were making substantial changes to the game that we weren’t able to playtest.

Another issue that we faced was communication problems. This was largely my fault, as I would often work on my own and make changes without communicating them to Catherine. I often have a hard time listening when I’m working “in the zone”, and sometimes unintentionally forget or ignore suggestions made by my team members.

These communication problems caused us to waste time in a number of ways. I spent two weeks working on a single visual effect that was ultimately cut. We weren’t able to playtest and get feedback as often as we would have liked. The game was intended to subvert and disrupt usability heuristics with intentionally frustrating and disruptive design, but we weren’t exactly sure how to quantify and observe that quality in our playtests.

Furthermore, my attitude towards the game would change frequently. Making something personal and introspective requires you to be in a certain mood, its difficult to create good work when you’re not in that introspective lethargy. Working on a four-month project, I was oftentimes outside of that mental state and had difficulty keeping motivated and maintaining the right vision for the project. Oftentimes, I would look at the game’s design and intentionality and hate it, feeling that it was the embarrassing byproduct of a transient phase of my life.

The game’s final encounter was one of the hardest things to design. At the end, the Pilgrim arrives in a dark corridor and must defeat the Shadow Beast. We were decidedly against creating an explicit combat encounter, as violence could detract from the game’s tone, but the limited range of player abilities restricted our options. We should have tested different iterations of the encounter, but lacked the time to experiment with stuff like AI, enemy projectiles, and complex level design. I’m still not satisfied with how the encounter turned out.

I often feel that I’ve been selfish in making a personal game as a collaborative project. The themes of The Pilgrim were relevant to me as it was a game that I really wanted to make. Catherine holds vastly differing views from me, so I feel that I pulled her onto a project that wasn’t relevant to her life and used her help unfairly.

We responded well to feedback. While the game’s controls were designed to degrade into something clunky and frustrating, playtests would often indicate that they didn’t serve the game well overall. As a result, we iterated through three 2D shooting systems and rewrote major parts of the character’s controller. While I wanted to use game feel metaphorically to convey the story a-la Thomas Was Alone and Dys4ia, players still needed narrative contextualization to explain why they were becoming increasingly weak. We iterated between several dialogue systems before ultimately settling on traditional cutscenes and making our protagonist silent. The stairwell in the first room was one of the most difficult things to create, as it had to be traversable by the player at two different stages without taking up too much space in the environment.

The game’s audiovisual style also worked very well, lending the gameworld a distinct feel. One of the design goals for the game was to create something atmospheric and immersive, much like the action-adventure games of my youth. Adaptive sound design by Austin DeVries nailed that presentation, and Catherine’s moody, textured art and level design allowed us to succeed in our worldbuilding goals. Incidental assets populated each room, showcasing an explicit dramatic arc for the characters that lived in the Temple.

The interplay of light and dark is one of the most important aspects of The Pilgrim’s background, serving an important gameplay purpose in some of the encounters: being exposed to darkness drain’s the player’s health, thus, players must stay near light crystals to survive. The use of textured planes and cubes allowed us to exploit Unity3D’s realtime lighting system, allowing us to create a dreamy, surreal atmosphere that we wouldn’t have been able to achieve using self-illuminated sprites.

We both grew as game designers. Both of us took on tasks that we had never done before and learned much about different aspects of game-making. Catherine took up level design, character animation, UI design, and scripting. I took up programming and ended up doing more programming and scripting tasks than I knew I was capable of. While we faced issues in project management and didn’t polish the game as much as we could have, both of us are far wiser and better game makers because of it, and move on with a great deal more skill and confidence as we graduate from game-jam style projects towards more structured methodologies of production and distribution.

I don’t know if I delivered on the game’s vision and I’m not sure if making the game has resolved what I wanted to deal with in my own life. Yet, through all the problems we faced during development and the stress of juggling the Pilgrim with other demands in my life, I must say that the project was an overall positive experience that I grew from.

I don’t think I’ll be doing an intensely personal game for the immediate future, as the projects screaming to be made in my journal are not artgames. The questions I went into the project with have yet to be resolved conclusively despite what progress I’ve made as a person.

Since we make art to make sense of reality and our place in the world, then I think I will return to The Pilgrim in the future. New life experiences will distill my perspective, giving me more to draw upon in crafting this microcosm of my reality. Tempered design skills will allow me to communicate with greater ludic nuance and grace. And life’s finite nature, and the infinite nature of the unknown, moots any hesitance towards game creation. I’ve grown from The Pilgrim, and journey forward onto new projects, people, and classes.

As I conclude this project, I would like to thank Peter Brinson, Richard Lemarchand, and Riley Piestch, who gave us the structure, support, and wisdom we needed to realize this project. Catherine Fox for her extraordinary patience and skill as we both went on this crazy journey. Austin DeVries for recording and mixing the game’s atmospheric soundscape and communicating with us remotely, and finally Steven Li for coordinating playtests and giving us the feedback we needed to make the right design decisions.